The Romanesque undercroft of the monks’ dormitory is one of the oldest surviving parts of Westminster Abbey, built in around 1070. Part of it was walled off in the 12th century as a separate secure chamber and was used by the kings’ Exchequer for storing the Crown Jewels. From 1281 wooden chests were kept there awaiting the Trial of the Pyx, when samples of coins were melted to test their silver purity, and the room became known as the Pyx Chamber. 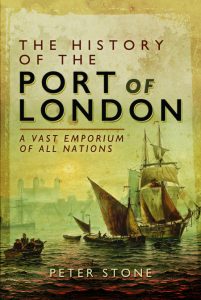 Monasticism was an important part of medieval life in England and many monasteries and convents were founded in and around London. The modern-day Westminster Abbey building was largely the inspiration of King Henry III in the mid-13th century but its origins go far back into Saxon times when Westminster was quite distant from London.

As the River Tyburn flowed towards the Thames to the west of London it divided into several parts. One branch flowed south into the Thames near where Vauxhall Bridge now stands. Another branched off eastwards at what is now Buckingham Palace, then sub-divided to form an island as it met the Thames at modern-day Westminster. During the Roman period there was perhaps a ford across the Thames at that point, and it is said a shrine to Apollo may have been built on the island. A Roman sarcophagus was discovered in 1869, and some Roman roof tiles have been found under Westminster Abbey’s Norman undercroft. In the centuries following the Romans the area was probably deserted and liable to flooding. During Saxon times the island was known as Thorn Ea, meaning ‘island of brambles’.

There are various accounts of the founding of a church at Thorn Ea. Some of these are certainly fictitious and originated in the 11th or 12th centuries at a time when the abbey’s resident monks were attempting to link its foundation to illustrious early Christians and saints. The Venerable Bede, writing in the 730s, wrote of St. Paul’s church in London but made no mention of a church at Thorn Ea. A charter to the monastery of St. Peter at Thorn Ea dated 785 during the reign of King Offa is now thought to be a forgery, but a small church may have been established at around that time. Even so, as an unprotected building, it is most likely to have suffered badly from Viking raids along the Thames during the 9th century. It seems the church did not survive.

More certainly, Dunstan, either during his time as Bishop of London in around 960, or later as Archbishop of Canterbury, established a monastery on the site of ‘ruined chapels’ in the marshland of Thorn Ea, at what was then known as Bulinga Fen. To do so he brought twelve monks from Glastonbury. A charter drawn up by King Edgar in the mid-10th century transferred a large area of land into the ownership of the monastery. Edgar’s gift of land stretched from the modern-day Farringdon Road on the western edge of the old city of London and included the present Covent Garden, Trafalgar Square, Soho, parts of Mayfair, St. James’s Park, and down to the Thames. Broadly, this area of about 2,500 acres is what we now know as the City of Westminster. The abbey was to keep these holdings for almost six hundred years.

The monastery observed the rules of the Order of St. Benedict, written by Benedict in about 530 for his own monastery at Monte Cassino. Over time, around 150 Benedictine monasteries were founded in England and it was typical for Benedictine monasteries to be sited in remote fenland. The Benedictine ‘black monks’ were to live in an enclosed community, dependent on alms or income from their lands. The earliest abbots are recorded as Wulfsige, Aelfwig and Wulfnoth, the latter dying in 1049.

From its earliest time, the monastery enjoyed royal patronage. Edgar, Ethelred and Cnut all gave gifts of religious relics. Cnut was the first king to establish a royal palace beside the monastery there on Thorn Ea and throughout the Middle Ages, what became known as Westminster, developed as a royal and religious complex surrounded by water. To the east was the Thames while the River Tyburn formed a moat around the other three sides, with the precinct reached across one of several bridges and under gatehouses.

When Cnut died two of his sons, the half-brothers Harold Harefoot and Harthacnut both claimed to be his successor. Harold was in England at the time of his father’s death, but Harthacnut in Denmark, so Harold took the English throne. When he died, possibly murdered, in 1040 Harold I became the first monarch to be buried at the monastery. But Harthacnut swiftly travelled to England, had Harold’s body exhumed, beheaded, and the body thrown into the surrounding marsh.

Harthacnut reigned for only two years before he died while celebrating at a wedding. In 1042 he was succeeded by Edward, a surviving son of Cnut’s predecessor, King Aethelred Unraed, and Edward was crowned at Winchester. King Edward grew up in Normandy while his father was exiled there during Cnut’s reign.  According to Vita Ædwardi, written two years after his death, he had a special devotion to St. Peter. About a decade or so after Edward’s death Sulcard, a monk at Westminster, wrote that Edward had vowed during his time in Normandy that if he could have the English throne he would make a pilgrimage to St. Peter’s tomb in Rome. However, when the deaths of Harold and Hardicnut finally delivered him the Crown his advisors prevented him from making the dangerous journey. The delegation he sent in his place was told he would be released from his vow on the condition he founded a monastery dedicated to St. Peter. Whatever the truth, Edward chose Dunstan’s old monastery beside his palace as the location for a great new abbey and he appointed his friend Eadwine as Abbot, and Robert, Abbot of Jumièges in Normandy to be Bishop of London. Edward and Eadwine would transform a small and struggling religious community into a great royal abbey.