With the outbreak of the Napoleonic War in 1803 the country was under the very real threat of invasion by Napoleon, who had assembled 160,000 men along the Atlantic coast. In Britain a volunteer force was recruited and a string of defensive Martello towers constructed around the coast but it would have been no match for the French if they could have crossed the Channel. Nelson was given command of the Mediterranean fleet, with HMS Victory as his flagship.

In September 1805 information was received that French and Spanish fleets had joined forces and were anchored at Cadiz where they had gathered to support the invasion. Nelson remained on deck during the subsequent battle, with fatal consequences. Twenty French and Spanish ships were destroyed or captured without the loss of a single British vessel. It was one of the great British victories of the Napoleonic Wars and 21st October was celebrated as the Trafalgar Day public holiday throughout much of the British Empire until the end of the First World War.

News of the battle and Nelson’s death finally reached London two weeks after the event, on 6th November, and the country went into mourning for the popular hero. Deaths in battle were normal but no-one anticipated that of the acclaimed commander and there was a general shock around the country and beyond. On being told, King George III is said to have commented: “We have lost more than we have gained”. That was certainly high praise considering what had been achieved was the devastation of much of Napoleon’s navy, the ending of the possibility of invasion, and (it could be argued) British dominance of the world’s oceans for the following century. George and the government agreed that Nelson should have a state funeral, the first awarded to a commoner and still one of only three that have ever taken place in this country (the others for the Duke of Wellington and Sir Winston Churchill).

The manner of Nelson’s death in such a dramatic and heroic fashion in the midst of battle transformed him from a national hero of his time into a legend whose name would live on forever in British history. We may imagine that souvenirs for national events are a modern phenomenon but commemorative mugs, plates and other merchandise were soon on sale, many immortalising Nelson’s pre-battle message to his men: “England expects every man to do his duty”. 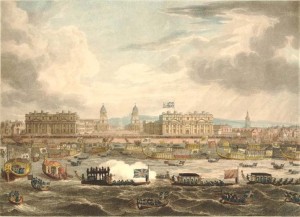 © The Trustees of the British Museum

Sailors killed in battle were normally buried at sea but due to his rank and the esteem in which he was held it was felt proper that Nelson’s body should be brought back to England. It was initially preserved in a ‘leaguer’ (a large casket) filled with brandy, camphor and myrrh, lashed to the mast of the Victory as it sailed back to Gibraltar where it underwent repairs. From there the ship continued to Portsmouth, then to the naval station at the Nore at the mouth of the River Medway where it meets the Thames Estuary. Before arriving, and while still in the English Channel, a doctor removed the fatal bullet from the body and it is still kept at the National Maritime Museum at Greenwich.

Following the Battle of the Nile, Nelson had been presented with the mainmast of the French flagship L’Orient, which he had stored at his chosen undertakers to be used to make his coffin upon his death. It was at the Nore that his body was transferred into that casket. The wooden casket was then sealed in an outer lead coffin before continuing upriver.