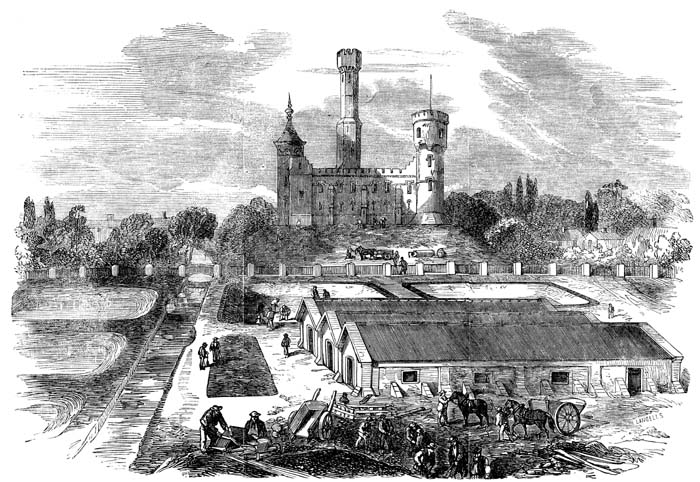 I have the good fortune to enjoy a view from my home across to one of London’s most unusually-designed industrial buildings. My street name is not generally-known to taxi-drivers but I need only say: “opposite the castle at Stoke Newington” and they know exactly where I want to go. In fact I am looking out to what at first glance appears to be a fortification of a Scottish baronial kind. I had at first little idea of its origins so began to investigate the history of this striking landmark. For the beginning of the story we have to go way back to the reign of Elizabeth I.

During the Middle Ages the people of London relied on rivers, springs, conduits and public fountains for their water. In 1582 the Dutch engineer Peter Morice established an ingenious mechanism at London Bridge. It pumped river water into a system supplying premises in the immediate area to the north of the bridge. However, this only worked at high tide and provided water for a limited area.

About twenty years later one Captain Edmund Colthurst devised a plan to bring fresh water from springs in Hertfordshire to London by means of a six-feet wide canal. Queen Elizabeth gave her provisional consent but died before a charter could be issued. King James provided the necessary approval in 1604 and work began on Colthurst’s ‘river’. His route was to be through Broxbourne, Wormley, Cheshunt, Theobalds Park and Edmonton, down to Islington.

Three miles had been completed when the City of London Corporation started to take a greater interest in the advantages of the scheme. An alternative plan was drawn up for a wider channel but most likely along the same route. They ensured that an Act of Parliament was passed, effectively over-ruling the King’s Letter Patent of Colthurst’s scheme. In 1609 the Common Council of the City announced it had accepted the new plan by one of their inner-circle, Hugh Myddelton, to complete the work based on their Act. Myddelton was the son of the governor of Denbigh Castle in Wales but, more importantly in this respect, a member of London’s Goldsmiths’ Company. He raised money for the initial work by issuing thirty-six shares, some sold for one hundred pounds each and some kept by Myddelton himself. Clearly his scheme relied heavily on that of Colthurst who was given four shares and a salary in compensation.

Work recommenced in 1609. It was a massive and cleverly calculated undertaking for the time. Ten feet wide, and with a water depth of four feet, it gently sloped five and a half metres over its sixty-kilometre journey, or just five inches every mile, allowing the contents to flow at exactly the correct speed and volume. In order to achieve that it was necessary for it to follow the contours of the land, thus creating many twists and turns along its length (some of which were straightened out in later years to shorten the waterway).

Work suddenly ground to a halt when owners of land through which the canal had to pass objected to Parliament, which King James (for bigger political reasons) subsequently dissolved, leaving the matter unresolved. Myddleton’s solution was to approach the King who, perhaps seeing the potential for a scheme that was for the general good but also one from which profit could be made, agreed to fund half the cost in return for half the profit. It was Myddelton’s master-stroke. Not only had he raised further finance but now had a backer against whom no landowner dare complain. Indeed, the King commanded that no-one should object to the work “…upon paine of his majesties highe displeasure…”. Work resumed in early 1612 and by that summer as many as three hundred men were employed on the undertaking.

Myddelton’s plan was to end his ‘New River’ just below the summit of Islington Hill, where an old duck pond was enlarged to become a reservoir, to be known as ‘New River Head’. There the ‘Water House’ was built, housing a workman controlling the flow of water into pipes, as well as being where money could be paid by customers who received their supply. Construction of the waterway was completed in September 1613 and an opening ceremony at New River Head attended by the then Mayor of London, together with Myddelton’s brother Thomas (who that same day was named the new Mayor of London), and many of the City aldermen.

The top of Islington Hill, roughly where you will find the Angel tube station these days, then overlooked London below, across open meadows. The reservoir was located a short way down the hill, between what is now the Angel and Sadler’s Well’s theatre. A system of pipes made from hollowed-out elm trees began to be constructed to take supplies from the reservoir, across the meadows and down through the streets of London. Each tree trunk was joined to the next by carving the end into a point which then fitted into a tapered hole in the next trunk. It was not the ideal system because the joints leaked, and the tree-trunks lasted only a few years before rotting away, requiring frequent replacement. The leaky joints also prevented pressurisation and wherever the route took it across low-lying ground the mains pipes had to be built up on trestles to create an overall gentle downward gradient. Pipes were laid underground within the city streets. London’s terrible congestion meant that it was impossible for work to be carried out during the day, so it was undertaken at night by candle and torch-light.

The first main pipe travelled as far as Smithfield and Newgate, then branched east to Cheapside and Aldgate and west to Temple Bar and Fleet Street. Smaller pipes branched off the main pipes. By the end of 1618 around one thousand five hundred premises were connected and soon the entire City of London was covered except for the area already supplied by the competing waterworks at London Bridge. Later in the 17th century the network was extended to supply Covent Garden and as far as Piccadilly, St.James’s, and Whitehall.

The problem of leakage meant that the pipes could not be left permanently filled. A system of stopcocks controlled the flow, with each area supplied for an hour or two several times each week. Premises connected to the pipe network had their own water tanks that filled when water was flowing. Any premises that wanted to buy New River water was required to install a thin lead ‘quill’ up to the main supply to which the New River Company would solder a brass ferrule to be inserted into their pipe. Each building paid an initial fee (normally of one pound but up to twenty five pounds for owners of larger trade premises) and thereafter a quarterly ‘fine’ depending on the type of establishment.

Although various people had put money into the enterprise it still remained the property of Hugh Myddelton, which was far from satisfactory from the point of view of its biggest investor, King James. Therefore in 1619 the King issued letters patent that converted it into a new legal entity known as ‘The Governor and Company of the New River’, with Myddelton as its first Governor and a specified number of elected officers. At the same time the King took the opportunity to slip into the founding charter a clause giving the company an effective monopoly of the supply of any new water supplies into London and Westminster. That privilege had never been granted in the original Act of Parliament but by 1619 James was the biggest shareholder so he was cleverly protecting his own investment without having to argue the case with a dissolved Parliament.