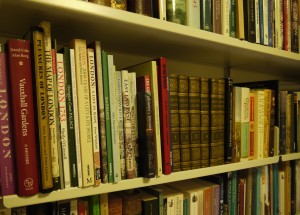 Here is a recommended selection from my bookshelves that have been used as source material for this website.

John Morris, Londinium – London in the Roman Empire (1982), Phoenix Press
A well-written and authoritative book by the late Dr.John Morris, former lecturer at University College London. Now becoming somewhat dated when so many new archaeological discoveries are being made but still a useful guide.

Dominic Perring, Roman London (1991), Seaby
As a former Museum of London archaeologist Perring describes what had been discovered prior to the book’s publication in 1990. Of course, many discoveries have been made since then.

Christopher Brooke, London 800-1216: The Shaping of a City (1975) Secker & Warburg
Brooke is a leading expert on medieval history and, as you would therefore expect, this book was authoritative at the time of its publication. However much has been more recently discovered and understood so it is necessary to read alongside other material.

Gustav Milne, The Port of London in Medieval London (2003), Tempus
An authoritative account of the medieval port by a former archaeologist at the Museum of London.

Caroline M.Barron, London in the Later Middle Ages (2004), Oxford University Press
A detailed account of medieval London government during a period when it was still evolving, by the professor of London history at Royal Holloway College, University of London.

John Schofield, London 1100-1600 (2011), Equinox Publishing
A general history of London during the Middle Ages and Tudor period from the point of view of what has been learnt from archaeology (until time of publication in 2011), by the prominent archaeologist.

Lisa Jardine, On a Grander Scale – Sir Christopher Wren (2002), Harper Collins
A biography of the scientist, mathematician and architect responsible for rebuilding many important buildings after the Great Fire of 1666.

Michael Cooper, Robert Hooke and the Rebuilding of London (2003), Sutton Publishing
A biography of the scientist and colleague of Wren who was significant in the rebuilding of the City after the Great Fire of 1666.

Samuel Pepys, The Diary of Samuel Pepys, Penguin Classics
Pepys famous diaries that record his experiences during a significant period in London’s history.

Liza Picard, Restoration London (1997), Phoenix
A detailed account of London in the second half of the 17th century.

Maureen Waller, 1700 – Scenes from London Life (2000), Sceptre
A detailed account of London at the end of the Stuart period.

Barry Coward, The Stuart Age (2003), Pearson Educational
A general and comprehensive history of England in the Stuart period.

Richard West, Daniel Defoe – The Life & Strange, Surprising Adventures (1998), Carroll & Graf
A biography of the entrepreneur and writer, with much detail of London in the late 17th and early 18th centuries.

Jenny Uglow, Hogarth – A Life and a World (1997), Faber & Faber
A biography of the 18th century London artist and the city in which he lived.

John Summerson, Georgian London (1945-2003), Yale University Press
The late Summerson was arguably the greatest expert on Georgian architecture and this is his classic account, revised a number of times.

Robert Ward, The Man Who Buried Nelson (2007), Oxford University Press
The biography of Robert Mylne, designer of the original Blackfriars Bridge and, as surveyor of St.Paul’s Cathedral, managed the arrangements for Nelson’s funeral.

John Richardson, The Annals of London (2000), Cassell
Key events in London from the Romans until the end of the 20th century.

John Pudney, London’s Docks (1975), Thames & Hudson
A good history of London’s dock but published before the demolition of the docks and the transformation to Docklands.

Peter Matthews, London’s Bridges (2008), Shire
The history of each of London’s Thames bridges.