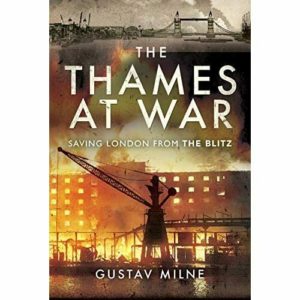 Gustav Milne & The Thames Discovery Programme: ‘The Thames at War – Saving London from the Blitz’ – Review

The Thames Discovery Programme was formed in 2008 to continue the work of earlier such projects and is part of Museum of London Archaeology. TDP’s small army of volunteers, known as FROGs (Foreshore Recording and Observation Group), are led by the team of Gustav Milne, Nathalie Cohen and Eliott Wragg. Throughout each year the FROGs gather at low tides on the Thames foreshore, searching for, recording, and collecting where appropriate, remains of London’s past. I was aware of the TDP’s discovery and recording of ancient remains on our river, such as Saxon fishtraps and the Tudor pier at Greenwich, but unaware of their ‘Thames at War’ project until the welcome publication of this book.

As the introduction to this volume reminds us, between 1940 and 1945 London suffered 253 night-time raids and 101 daytime raids by the German Luftwaffe, with 80,000 casualties. Even during night-time black-outs the bomber navigators could easily identify their target due to the distinctive shape of the River Thames. Anyone who has the smallest knowledge of London during the Blitz will be aware of the great devastation caused. The Nazis knew of the huge importance of the Port of London to Britain’s economy and therefore London’s docks were a key target. Most of us have seen dramatic photographs of bombed and burning riverside warehouses.

What is almost forgotten, indeed, was almost unknown at the time, was the work of Thames-Flood (the Thames-Flood Prevention Emergency Repairs service), the London County Council’s rapid response unit. London is low-lying, some of it below the level of the Thames at the highest tides. Furthermore, the metropolis has much infrastructure and accommodation below ground, including basements, the Underground system, much of the electricity and telephone network, and drinking water supplies and sewers. The river is held in check by embankments. If they were breached there would have been a catastrophe.

The task of the T-F units was to rapidly attend and inspect any bomb-strikes along the river, provide their report, and make temporary, and eventually permanent, repairs to any breach. They often made their initial inspection as the bombs were still falling. The resource had been put in place prior to the war due to the foresight of the LCC’s Chief Engineer, Thomas Peirson Frank. The necessity for such a coordinated team became abundantly clear from the destruction brought about on the first night of the Blitz in 1940. From then until 1945 the T-F units had to deal with at least 122 breaches, many coming during intense periods of bombing. (For example, twenty of those incidents were logged on just one night of 11-12th May 1941).

Information about Thames-Flood and the dangers of flooding was suppressed during to war in order to not give the Luftwaffe ideas. It was kept so secret that even residents local to the four T-F bases along the Thames were unaware of their existence, either during or after the war. Peirson Frank was knighted for his work. 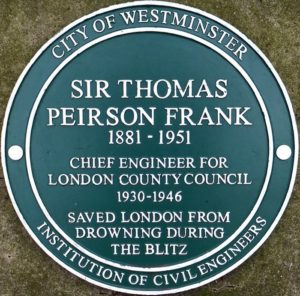 It is good to know his wartime efforts had not been completely forgotten: in 2014 a memorial was unveiled in Thomas Peirson Frank’s memory on the embankment wall close to the Houses of Parliament. (His name is also included in the inscription on Waterloo Bridge, of which he oversaw the building during the course of the war).

There are many interesting, and sometimes amusing, snippets of information contained within. We learn, for example, that the T-F unit would make emergency repairs of sandbags that sometimes stayed in place for several years. The bags then needed to be continually replaced because they were stolen, or thrown into the river by playful children not understanding that a flood could ensue. Or that when the riverbank at Craven Cottage was destroyed by a bomb, Fulham Football Club were too impoverished to repair it. Or that a house-boat owner was able to stock up with fuel for many years after a bomb destroyed a coal storage at Dolphin Square. Or that a direct hit on a riverside flour-mill left a huge ‘dumpling’. I was fascinated to read that the ‘temporary’ repairs to the Greenwich Foot Tunnel are still in place today.

The second half of the book looks at other aspects of London’s war effort: the river fire service; the building of temporary wartime Thames bridges and damage to each of the permanent bridges; a catalogue of the many vessels sunk in the Thames and Thames Estuary; archaeological information on several small sunken craft discovered in London by the Thames Discovery Programme; the Dunkirk ‘Little Ships’ and Thames sailing barges involved in Operation DYNAMO; and the role of Thames barges and lightermen in Operation OVERLORD.

This book sheds light on what until now has been an almost unknown but important aspect of London’s survival during the Second World War. It explains the vital work of the Thames-Flood unit, adding archaeological evidence to earlier records held at the London Metropolitan Archives. It makes an excellent companion to the earlier The Thames on Fire by Lieutenant Commander L.M. Bates (Terence Dalton Ltd., Lavenham, Suffolk, 1985), which gives a broader account of the war effort on the Thames during the Second World War. As would be expected of Gustav Milne (who has written or contributed to several books on early London history), this is a scholarly yet easily readable account. It contains much detailed information, together with extensive contemporary and modern photographs from many sources that illuminate the text.